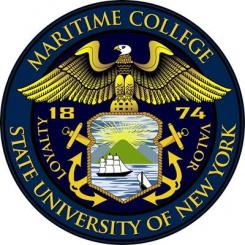 Catie Hanft is a native of Queens New York and a graduate of SUNY Maritime College.  She is part of a legacy family following her father and preceding her brother at Maritime.  She earned a BS in Meteorology and Oceanography and, as the first female recipient of an NROTC Scholarship, she commissioned into the US Navy upon graduation from SUNY Maritime.

She spent 27 years and 17 tours of duty in the Navy.  She earned her Masters in Systems Management from the Naval Postgraduate School in Monterey, CA.

While moving so many times had it's challenges, CAPT Hanft lived overseas during three tours and travelled extensively in the Far East.  She was privileged to take command three separate times during her time in the Navy.  She commanded the Navy Consolidated Brig in Charleston, SC, a medium security prison/correctional facility for violent crime offenders with sentences up to 10 years.  She was the first Commanding Officer of the Navy Expeditionary Guard Battalion sent to Guantanamo to support detainee operations during Operation Enduring Freedom.  Her final tour in the Navy was as the Commanding Officer of the Naval Support Activity South Potomac, comprised of two Navy Weapons Stations - one in Dahlgren, VA and the other in Indian Head, MD - both research facilities for development and testing of Navy weapons systems.  She was also a Battalion Officer and Ethics Professor at the US Naval Academy during her tenure in the Navy.

After travelling the world, CAPT Hanft retired in 2012 and returned to her alma mater, Maritime College, where she currently serves as the Acting Commandant of Cadets.