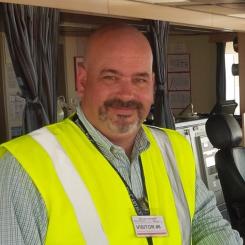 Robert Cannizzaro is a shipping executive with more than 21 years of experience in containership operations and intermodal logistics.

After graduating from the SUNY Maritime College in 1994, he joined the Logistics department of a European containership owner and operator.  After a year, he joined their Marine Operations department as a vessel planner.  Over the next 20 years, he would move on to hold management positions in both departments along with several years as the North American Risk Manager for the company.  He is currently the Vice President, Marine and Terminal Operations for North America. Just prior to this position, he managed the company’s front line logistics center as Assistant Vice President of Equipment and Logistics.

In addition, Mr. Cannizzaro holds positions of responsibility in several industry organizations including the Ocean Carriers Equipment Management Association  where he serves as chairman of that group's Operations Council as well as the Intermodal Association of North America where he is a member of the Intermodal Interchange Executive Committee which oversees the interchange of container equipment between parties in the United States and Canada.  In this role he also acts as an arbitrator on the rotating Dispute Resolution Panel.  Previously, he served on the management boards of the Consolidated Chassis Management’s Midwest and Mid-South chassis pools.

Passionate about education, Mr. Cannizzaro went on to earn a M.S. in International Transportation Management from the college as well as an M.B.A. from Centenary College of New Jersey.  His excitement for distance learning stems from the accessibility it provides students who might not otherwise be able to participate in educational programs that would inspire them to achieve their goals.