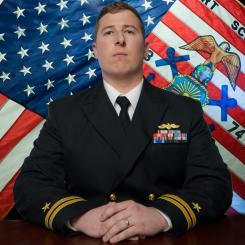 LT Thomas Lucy is a licensed 2nd Mate Unlimited (Oceans), and a Lieutenant (O-3) in the United States Navy. Upon graduating from the United States Merchant Marine Academy in 2013, LT Lucy sailed professionally as a Mate for American Cruise Lines, as a Dynamic Positioning Officer / 3rd Mate in the offshore drilling industry with ENSCO plc in the Gulf of Mexico, and as Mate on Caesar’s gambling riverboat.

In combining USCG Mate service, military service, and cadet service, LT Lucy has gotten the opportunity to work on container ships, drill-ships, tugs, barges, RO-ROs, tank vessels, military watercraft, cruise-ships, riverboat gambling vessels, and now a training vessel thanks to the Empire State VI. With the downturn of the offshore oil & gas industry in 2016, and as a member of the Strategic Sealift Officer program, LT Lucy volunteered for Active Duty service, and mobilized to Afghanistan from Aug 2016 – October 2017. On this deployment, after serving as an Operations Officer in a 2-star General NATO command for two months, LT Lucy was transferred to an O-5 billet, serving as the Team Leader of the Afghanistan Ministry of the Interior National Police Coordination Center advising team.

As Team Leader, LT Lucy commanded 15 NATO membership nations officers & seasoned U.S. military contractors on over 170 Train, Advise, Assist missions to training sites of the Afghan Ministry of the Interior, and served as the direct PIC for all NPCC related matters to the Deputy Advisor to the Ministry of the Interior (2-star General). In addition, LT Lucy served as the NATO appointed advisor the Afghan Police Air Movement Cell’s Commander, who coordinated all casevac/medevacs for all WIA/KIA Afghan police throughout Afghanistan. Upon his return, LT Lucy began his current position as Battalion Officer at SUNY Maritime College in Jan 2018. He currently is pursuing a graduate degree at Maritime, a Master’s of Science in International Transportation Management, and additionally serves as the Head Coach of the Men’s Rugby Team, and as an Adjunct Professor in the Marine Transportation department at the College.