Celebrating Constitution Day and Reflecting on the 19th Amendment 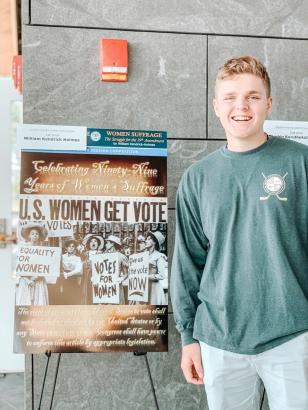 Constitution Day kicked off with opening remarks from New York State Senator Alessandra Biaggi of the 34th Senate District who stated, “The 19th Amendment was only just the beginning. What we are seeing today, finally, is the incredible effort to see an equal number of women run for office, become elected and be in the room where the decisions are being made.”  Senator Biaggi encouraged students to use their most powerful tool, their voices, “It is that tool that has led to significant changes in our country and for all of the young people, it is the tool that is going to continue to institute change, continue to break barriers down and continue to challenge the status quo.”

Alumna, Bethan Rooney recounted her experience as one of only a few women who graduated from Maritime College in 1991. As a woman in the Maritime industry, she faced numerous challenges, but overcame adversity to pave the way for women to follow in her footsteps. In the aftermath of September 11, 2001, Rooney assumed the position of General Manager, Port Security at The Port Authority of New York and New Jersey. She took crucial measures to manage the port’s security and emergency program creating a model for numerous ports in the United States. Throughout her career she learned lessons that applied to more than her professional life, “The mantra see something say something, by some is overused. But it’s not see something say something about security, it’s see something say something about security, about equal rights, about equal pay, about the abuses that go on in our society, in our homes, and in our families.”

Rooney reinforced Senator Biaggi’s words of encouragement to use their voices, motivating students to take action, “When you see something that you know is wrong, just as the women pioneers before us, it’s not for the man or woman next to you to take responsibility. It is incumbent upon each and every one of us to see something and not only say something, but to take action and do something about it.”

Congratulations to all of the prize winners!