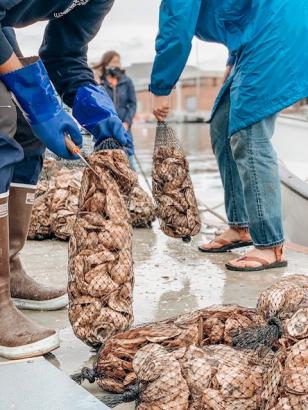 Billion Oyster Project (BOP), a community science project founded by the New York Harbor School, has made its mission to restore oyster reefs to New York Harbor. Oysters, also known as “ecosystem engineers,” increase biodiversity levels by attracting life and producing a cleaner and abundant biodiverse marine ecosystem. Maritime College has partnered with BOP to advance and achieve their mission by helping restore the reefs at Soundview Park. Maritime’s Olivet Pier will serve as a nursery for one year to allow the oysters to mature before transporting them to Soundview Park’s reefs in the spring of 2020.

On August 28, crew members and volunteers worked tirelessly to install 5 million juvenile oysters at Olivet Pier. Maritime’s waterfront now holds 80 super trays, structures designed to hold the oysters. Crew members and volunteers filled super trays with recycled oyster shells covered in spat (juvenile oysters). Each shell hosts 7 to 20 spat on average and every super tray is home to 15,000 to 70,000 juvenile oysters. Over the next year, the oysters will be monitored until they are transported to their final destination, Soundview Park‘s reefs. Maritime’s partnership with BOP and its participation in the Soundview Reef Restoration Project is an example of the vital industry partnerships the College has established that impact local waters.

To learn more about the Billion Oyster Project, visit here.