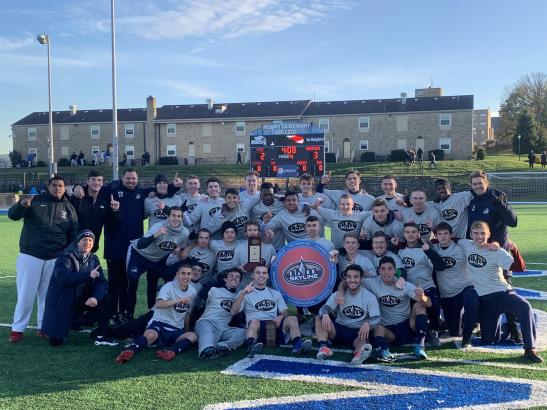 The Maritime College men's soccer team has successfully clinched the Skyline Conference Championship. As the Privateers entered into their third double overtime period of the playoffs, freshman Frank Schmidt delivered the championship-winning goal in the 106th minute of the game.

The Privateers netted the first goal after a slow start in the game against the Mount Saint Mary Knights and tied the game 1-1 at the 20th minute. Maritime controlled possession significantly better in the second half, and while they out-shot the Knights in the second period, neither team could score sending the Privateers to their third straight overtime game of the playoffs. Freshmen Jack Kilmeade magnificently intercepted an errant pass and found Schmidt, who cut towards the goal, beating the opposition’s goalie and scoring the game-winning 3-2 goal.

Congratulations to all the members of the men’s soccer team on their Skyline Conference Champion win! Learn more about men's soccer and Maritime athletics here.