Nobel Laureate Recognizes the Work of Mathematics Professor Daniel An 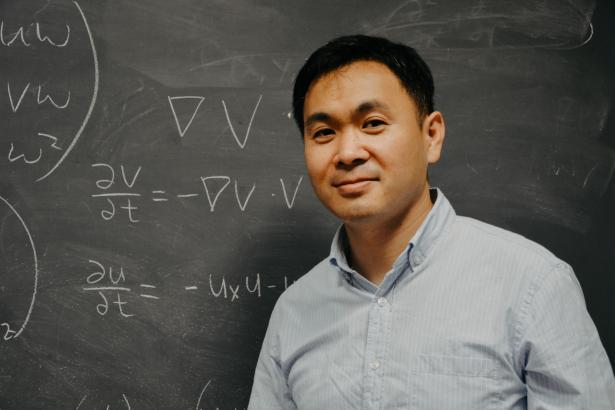 At only ten years old, Daniel An began learning how to code. His strong interest in problem-solving was the motivation behind pursuing a degree in mathematics at Korea University in his native country of South Korea. Continuing his studies there, he received a master’s degree in Applied Mathematics and learned numerical coding. It was his fascination with physical insights as a resource to better understand mathematics that ultimately brought him to the United States to study mathematical physics.

While pursuing a Ph.D. at Stony Brook University, An met Pawel Nurowski, a visiting mathematics professor from Poland. They collaborated on a research project and An impressed Nurowski with his coding skills. In 2012, Nurowski and his research partner Krzysztof Meissner were in search of an individual to assist with their research on ring-type structures in the Planck map of the cosmic microwave background. They were in need of someone with substantial knowledge of math and physics, as well as the ability to code. An was asked to join their team, flying all the way to Warsaw, Poland to complete the coding. Roger Penrose, a mathematical physicist who was recently awarded the 2020 Nobel Prize in Physics, was fascinated by their findings. Penrose began working with Dr. An and his Polish colleagues to further their research and identify evidence of Hawking points to prove his theory on black holes.

Shortly after the 2020 Nobel Prize announcement, Penrose was interviewed and discussed his 1965 research that earned him the highly prestigious honor. He explained his latest direction of research published in the Monthly Notices of the Royal Astronomical Society, mentioning the work he conducted in collaboration with Krzysztof Meissner, Pawel Nurowski, and Maritime College’s Dr. Daniel An. The May 2020 publication is a continuation of his research on black holes and theory on the origins of the universe. As a team, they discovered strong evidence for Hawking points, remnant signals from the "Hawking evaporation of supermassive black holes in the aeon prior to ours," in the cosmic microwave background. An received recognition for his contribution of calculations, writing codes, and running the programs. “To hear Penrose speak my name to an international audience made me extremely happy. It felt surreal,” stated An. While the work was met with some counter-arguments, Dr. An is seeking to uncover more evidence to Penrose's new theory.

In addition to teaching Mathematics at Maritime College, Dr. An also leads the coding club and continues to work on research projects outside of the maritime community. His advice to students is: “Add coding to your skillset. It will open doors for unique opportunities.”