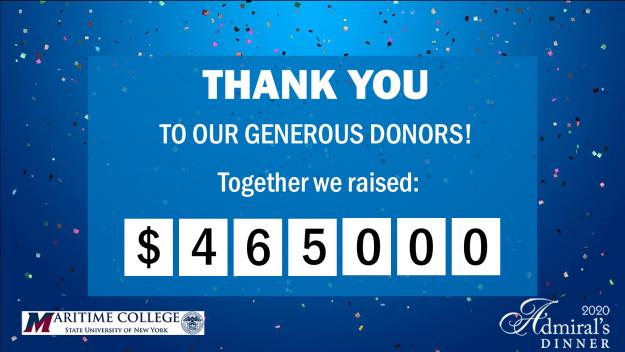 On Tuesday, September 22, 2020, the Admiral's Dinner was a virtual celebration of the Next 100 Years of the Jones Act. Thanks to the generosity of the event sponsors, industry partners, alumni and friends, this important event raised $465,000 toward student scholarships. The Admiral's Dinner is held annually for the purpose of raising funds for student scholarships. This year's event celebrated the Next 100 Years of the Jones Act and each of the honorees received an award as a token of their support and advocacy of the Jones Act, as well as their notable achievements as maritime industry leaders. Over 300 registrants participated in the free event, taking part in the College's first-ever virtual dinner. The evening concluded with the Captains' Afterglow, a conversation between Captain Jim DeSimone, former Master of the T/S Empire State Vl, and Captain Morgan McManus, current Master of the T/S Empire State Vl.

View the Virtual Admiral's Dinner in its entirety to learn more about the Jones Act, the four distinguished honorees, student need and the importance of giving.

The Admiral's Dinner e-Journal showcases the evening's program, sponsors and other pertinent information.

Lindsay M. Price, Maritime College Class of 2007 is the senior master and first female officer at G&H Towing Company. As captain of the David B tug, Price is responsible for the safety and training of the crew. She is a member of the Women International Shipping and Trading Association, Women in Maritime Operations, the Nautical Institute, and the Houston/Galveston propeller clubs. She works closely with Houston maritime high schools to educate young men and women about the maritime industry. Capt. Price serves on the Alexandra Hagerty Women’s Maritime Foundation board, a non-profit organization offering nationwide scholarships and education for the advancement of women and minorities in the maritime sector, specifically those pursuing unlimited tonnage engineering and mate licenses.

Michael Roberts is president of American Maritime Partnership, a key industry trade association and serves as senior vice president for Crowley Maritime Corp. He has represented Crowley on government matters since first joining the company’s DC office in 1991 and holds more than 30 years of experience in Washington both in-house and with top D.C. law and lobbying firms. Mr. Roberts has represented Crowley on the major issues affecting the industry, including the Maritime Security Program, Jones Act and economic regulation. He is one of the founding members of the American Maritime Partnership.

Mark Ruge's practice is focused on the federal government, representing clients on policy matters before Congress, administrative issues before the federal agencies/departments. He is involved in a broad range of maritime issues. A former staffer for the Congressional committee overseeing the maritime industry, he is counsel to the American Maritime Partnership, the national Jones Act coalition, and many other maritime organizations including the six State Maritime Academies. He was recently inducted into the Great Lakes Marine Hall of Fame, the only lawyer ever so honored.