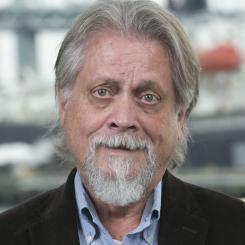 Larry Howard, Ph.D. is a Professor in the GBAT Department at SUNY Maritime College.  Beginning in 2006, Dr. Howard initiated and directed at SUNY Maritime three annual “Trojan Horse” events, exercise scenarios that tested the vessel security and facility security plans at the college but also involved a collaborative testing of security plans of other participants, including federal, state, and local agencies, and private sector shipping companies.  With the cooperation of colleagues he initiated an undergraduate minor in intermodal and maritime security offered by the college as of fall term 2006.  In collaboration with Professor Jeff Weiss, Dr. Howard organized the annual Conference on Cutting-edge Issues in Shipping (now known as the”Groundhog Day Event” at SUNY Maritime) that will be in its sixth iteration in February 2011.  He and Professor Weiss have co-hosted several symposiums, including “In Hot Pursuit of Pirates” in April, 2009, and “Women in the Business of Shipping”  in April 2010.