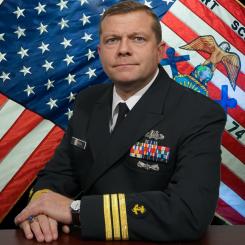 Adam Grohman was born and raised in Pomona, New Jersey. He received his Associates in Science and Associates in Arts from Atlantic Cape Community College and then attended Long Island University at C.W. Post and completed his Bachelor’s in Fine Arts degree in Film. He attained his Master’s in Arts in American History and a second Master’s in Arts in Military Studies with a concentration in Naval Studies from American Military University. He is a boatswain’s mate in the United States Coast Guard Reserve and has served on both active and reserve duties in Cape May, New Jersey, San Diego, California, Guantanamo Bay, Cuba as a member of a USCG Port Security Unit Detachment, and most recently, Jones Beach, New York. Adam has worked in various aspects of higher education for two decades and has taught a variety of courses at LIU C.W. Post, LIU Brooklyn, NY Institute of Technology and SUNY Maritime. Adam is a PADI Dive Master and has successfully researched multiple shipwrecks and their histories in the New York and Long Island areas. His columns, “In Our Waters” and “Sentinels and Saviors of the Seas” – which highlights the rich history of the United States Coast Guard - are featured monthly in Long Island Boating World Magazine. In addition to his columns, he has published over twenty-five books highlighting various aspects of maritime history, children’s stories, and several fiction titles. Adam is the proud father of two sons, Aidan and Liam.