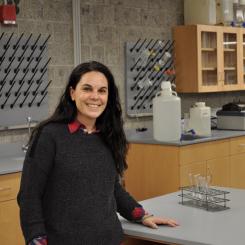 In her first semester she was instrumental in developing a hands-on field course. As the capstone experience for Marine Environmental Science (MES) students, the course exposes students to the field and laboratory techniques commonly used to address marine environmental problems. This course also launched a water quality monitoring program focusing on the impacts of combined sewer overflows in the East River. Dr. Panzeca is interested in research which focuses on the effects of urban environments and climate change on local marine waters.