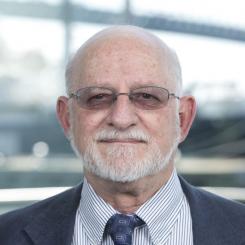 Dr. Shmuel (Sam) Yahalom holds a Ph.D. in Economics from the Graduate Center of The City University of New York since 1984. He specializes in economics and finance of ports and terminals, maritime transportation, ocean shipping, marine highway (short sea shipping) and port and maritime security. He joined Maritime College in 1978 and was appointed Distinguished Service Professor in 2004. He served as the director of the Graduate Program of Transportation Management at SUNY Maritime College for nearly seven years and served as Director of Research for Maritime College for eight years,.

Dr. Yahalom's career began with his Ph.D. dissertation, “Causality Relations Between the Effective Exchange Rate in Imports and Inflation in Israel” in 1984. Its subsequent publication (1984) changed the economic policy in fighting inflation in Israel and led, over a relatively short time, to the reduction of inflation from an annual rate of 444% to normal inflation rate levels in OECD countries.

In 2016, he and Dr. Guan Changqian developed a new methodology of determining the minimum port time for containerships and its implications of containership economies of scale in the port, in the paper “Containership Port Time: The Bay Time Factor.” This model was used by the authors to answer “Containership Bay Time and Crane Productivity: Are They on the Path of Convergence?” and to determine “Container Moves Per Lift: The Impact of Spreader Technology on Bay Time and Berth Time.” A related research topic is “Port Congestion and Economics of Scale: The Large Containership Factor.”

Dr. Yahalom published numerous articles and research reports frequently with Dr. Guan. He has lectured and presented his numerous research results in conferences and meetings nationally and internationally. The research articles, reports, lectures and quotations are primarily in the area of ports and maritime. His research paper, “The Dual Currency System in China” (1989), published in English and Chinese, addressed the need to change the Chinese dual currency system, which was subsequently changed in 1994.

Dr. Yahalom is a member of the Connecticut Maritime Association (CMA). He has been responsible for the annual Student Research Presentations session in the CMA annual meeting in March since 2012. He has been interviewed for newspaper articles and quoted in newspapers and journals.

Dr. Yahalom has served as principal investigator and project manager for many projects, assuming the responsibility of economic and operations analysis. A sample of other projects includes:

In the academic year of 1987-88, on sabbatical, Dr. Yahalom was a Fulbright Professor in the American Studies Center in Shanghai International Studies University, Shanghai, China.

In the academic year of 2001-02, on sabbatical, he was a visiting professor in the Department of Shipping and Transportation Management in National Taiwan Ocean University, in Taiwan.

Between 2006 and 2012 Dr. Yahalom was a visiting professor and a member of the board of advisors in the Ruppin Academic Center in Israel.