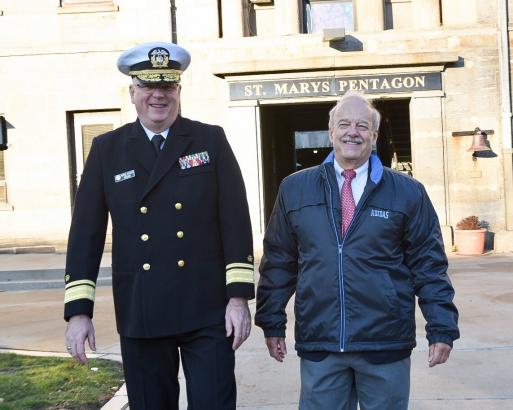 Capt. Robert Johnston ’69 will be awarded an honorary doctoral degree from the State University of New York at SUNY Maritime College’s May commencement ceremony.

Johnston will receive the degree and give the commencement speech, addressing the class of 2018 and offering them advice and wisdom as they begin their careers and the next chapter of their lives.

“Capt. Johnston is widely respected for his business acumen and comprehensive understanding of the maritime industry,” said Rear Adm. Michael Alfultis, president of SUNY Maritime. “In addition to his contribution to our industry, Capt. Johnston has been a dedicated alumnus, serving as an advocate and an advisor to Maritime College. His long and impressive career in the industry and his dedication to service of his alma mater will provide a valuable perspective to our graduating students.”

Johnston has supported Maritime College and its students for years, and is a recognized leader of the maritime industry.

After graduating from Maritime College in 1969, Johnston sailed for seven years with Overseas Shipholding Group, one of the largest tanker companies in the world. He came ashore in 1976 as a port captain and worked his way up through the ranks, keeping a keen eye on safety procedures and regulations.

In 2013, he was named president and chief executive officer of Overseas Shipholding Group and spent 18 months reorganizing the company that had filed for Chapter 11 bankruptcy the year before he took the helm. Thanks to his leadership and vision, the company emerged from the bankruptcy proceedings with a strong balance sheet, a focused strategy and a solid customer base.

John Ray, chairman of the OSG board said, “Bob’s contributions to OSG’s success over the past 45 years cannot be overstated. He is an incredibly skilled shipping operator and industry leader, and he was instrumental in our ability to maintain uninterrupted, high-quality service to our customers during our restructuring.”

Johnston has been active across the maritime industry, serving on high-level boards and committees through the years. He served as chairman of the board and committee member of the Alaska Tanker Company; served as vice chairman of the International Association of Independent Tanker Owners; and been a member of the Council and Classification Committee of the American Bureau of Shipping and the American Maritime Association.

In recognition of his many career accomplishments and significant contributions to the international maritime industry, the United Seamen’s Service honored Johnston at their 2012 annual dinner in New York City with the highly esteemed Admiral of the Ocean Sea award — one of the maritime industry’s most prestigious honors. The Seaman’s Church Institute has honored his contributions to the industry, and Johnston was also recognized with the 2015 Lifetime Achievement Award at the 245th annual dinner of The Marine Society of the City of New York, a charitable and educational organization whose regular membership is composed entirely of seafarers.

He was named Distinguished Alumnus of the Year by the Fort Schuyler Maritime Alumni Association; and honored at the 2008 Maritime College Admiral’s Scholarship Dinner. Johnston has been a significant supporter of the college, helping to raise vital funds for student scholarships and academic programs.