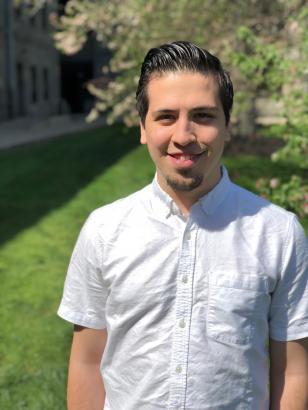 For more than two months this summer, Electrical Engineering junior Christian Brady-Alvarez will be one of a team of researchers from across the country working to improve the nation’s electric grid.

He will be a summer research intern on a project focused on improving integration and power transfer between solar panels and the electric grid.

The internship is part of the National Science Foundation’s Research Experience for Undergraduates – Immersive Research in Energy Generation, Storage/Conversion and Power Transmission. The program is housed at Tennessee Tech University and partners a select group of undergraduates with Electrical Engineering faculty to work on original research.

“I chose this project as my first choice because photovoltaic grid integration is what my own research has been based off,” the Queens native said. “It’s all about how the solar panel integrates itself into the larger electric system, including how the panels are installed and how they move with the sun.”

Brady-Alvarez has been part of original research since he transferred to SUNY Maritime College from LaGuardia Community College in 2016. He has shown a great deal of interest in one of Dr. Salem Elsaiah’s research areas, about the optimal integration of renewable energy resources into the main power grid. Elsaiah, an Electrical Engineering professor, invited Brady-Alvarez to assist with writing a few research papers shortly after Brady-Alvarez arrived on campus. Since then, the pair, in conjunction with a small team of other students from the Electrical Engineering program, have disseminated some of their research findings at the IEEE Power and Energy Conference at the University of Illinois and other scholarly conferences.

Elsaiah and Brady-Alvarez also co-authored a chapter for an upcoming book, “Renewable Energy: Research, Development and Policies,” which will be published in November by Nova.

Brady-Alvarez and Elsaiah also submitted a paper to the IEEE North American Power Symposium, an annual IEEE meeting where experts and researchers from around the world discuss current and future development of the nation’s power grid.

One of Elsaiah’s research areas focuses on power distribution, specifically microgrids. A microgrid is a system in which power-generation sources are dispersed throughout a network to create redundancy for consumers.

The pair are also working to assist with implementation of the U.S. Navy Vision of 2035, which calls for All Electric Ships to be driven by hybrid AC and DC systems. This work is particularly useful in the maritime industry because ships must generate their own power and so operate as contained microgrids. Redundancy is critical because if a ship loses power for an extended period of time, a situation can quickly devolve into one where the ship, its cargo and the lives of its crew are at risk. But the work transfers between land- and water-based applications easily.

“Learning to analyze a ship’s systems helps in analyzing a terrestrial system, so the work at Maritime is a great background to have, whatever I do after graduation,” Brady-Alvarez said. “I’ve always been interested in how things work and in physics. I don’t like getting just the surface knowledge, I want to go deeper. Research has always fascinated me.”

During the summer internship, Brady-Alvarez will build on the knowledge he has gained in class and through his research with Elsaiah. In Tennessee, he will work about 40 hours a week with a faculty advisor and a graduate student, studying microgrids, solar panels and power distribution. The program will also include professional development workshops, engineering seminars and a trip to the nearby Oak Ridge National Laboratory.

“From the moment I met Chris, during the first week of Engineering 381, I found him to be very interested in these systems and structures. He asks about very interesting points in class,” Elsaiah said. “Anything sponsored by the NSF is of very high quality and very competitive. I know the principal investigator connected to this project by reputation and the power program at TTU is very strong.

“Chris wants to go to graduate school, so all of this is really about helping him network to find a graduate program with research opportunities.”