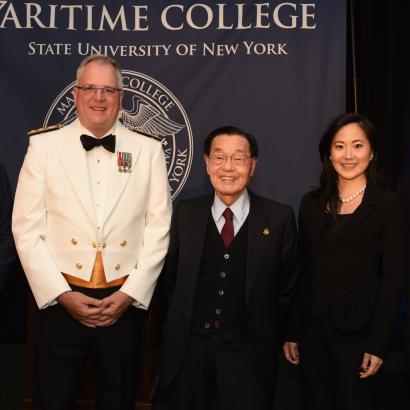 “The Chao Scholarship will benefit generations of students who are interested in pursuing maritime and engineering studies, and possess a demonstrated knowledge of the Chinese culture and language,” said Rear Adm. Alfultis. “Having been one of the youngest Chinese ship captains in the modern era, Dr. Chao and his family recognize the relationship between aprofessional educationanda strong maritime work force.”

Foremost Group, Dr. Chao and Ms. Chao were honored at SUNY Maritime College’s 2018 Admiral’s Scholarship Dinnerfor their leadership in the maritime industry and for promoting international educational initiatives. They addressed a record-sized audience of nearly 700 attendees that included industry leaders from the New York region and around the world, college alumni, friends and students. An American of Chinese descent, Dr. Chao spoke of his career in the maritime industry, of the importance of its continued professionalization and the desire to share his family’s success with future generations.

“My parents have always believed in the transformative power of education, and they raised us with a deep conviction in the importance of education as a foundational building block to cultivating one’s self to make a positive difference in the world,” said Ms. Chao. “They taught us that material things do not last - but education you can take anywhere. And with education, you can always start again.”

The Chao family’s leadership in education spans decades and, like Foremost Group, has had a global reach. In recognition ofhis philanthropiccontributions, Dr. Chao has been the recipient of innumerable honors and awards, including induction into the International Maritime Hall of Fame at the United Nations.

Dr. Chao and his late wife, Mrs. Ruth Mulan Chu Chao, dedicated their lives to promoting education and philanthropy. Through their generosity, thousands of students have been awarded scholarships. The Chao Foundation’s Mulan Educational Scholarship Fund helps students from the National Taiwan Ocean University pursue graduate degrees at SUNY Maritime College, including the establishment of a cooperative agreement between the two schools in 2016. As a result of that agreement, to date, two students from Taiwan have attended the SUNY Maritime campus, and the first SUNY Maritime student is studying in Keelung City, Taiwan.

Ms. Chao concluded, “Our industry plays a vital role in today’s world. We bring goods from where they are produced to where they are needed. In so doing, we build bridges between countries and among peoples. If you ask me, the world needs more maritime people.”

The Chao family hopes that the Ruth Mulan Chu Chao and James Si-Cheng Chao Endowed Scholarship Fund will inspire students to follow the path that has been central to Dr. and Mrs. Chao’s success.

For more information about the scholarship fund and to make a donation, please visit our website.

Foremost Group is an American shipping company with offices in the United States and Asia. Founded in New York in 1964, by Dr. James S.C. Chao and his late wife, Mrs. Ruth Mulan Chu Chao, the company today is a global leader in the dry bulk shipping industry and has earned a worldwide reputation for its commitment to exceptional service and performance and the highest ethical standards. Learn more: www.ForemostGroupUSA.com.

Combining classroom and lab learning with summer sea terms aboard the college training ship and industry internships, SUNY Maritime College prepares its 1,800 graduate and undergraduate students to be leaders in the shipping, transportation and power generation industries, as well as in government, military and business. The 55-acre campus is on a peninsula between the Long Island Sound and East River, 30 minutes from midtown Manhattan. Find out more at www.sunymaritime.edu