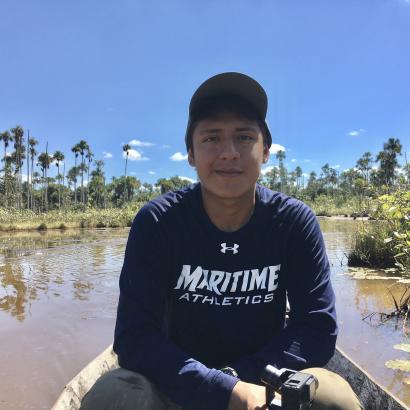 Over the summer, SUNY Maritime College students Isaul Villaneuva and Mustafa Islam helped stop an illegal gold mining operation, swam with piranhas and caimans, and were bitten by at least 10 different exotic species.

For the two Marine Environmental Science majors, these experiences were just another part of their life-changing internships protecting and studying part of the Amazon rainforest.

“By 2020, the wild animal population is predicted to decline by two thirds. That honestly scares me and that’s what drew me to this internship,” Villaneuva, of Manhattan, said. “It’s important to create a safe space for millions of species to sustainably coexist. The first step to save the Amazon is creating reserves like this and encouraging people to see them for themselves.

“I had three years of facts and coursework but the magnitude of the problems didn’t really hit me until I saw it for myself.”

Villaneuva and Islam were the first Maritime students to volunteer at the Panthera Sanctuary, in the Madre de Dios region of Peru. The sanctuary was established in 2013 to protect part of one of the world’s most diverse ecosystems.

The 60-hectare sanctuary is run with a staff of five and a team of between 10 and 20 volunteers from around the world. With limited staff and scientific equipment, most of the tracking and monitoring projects were conducted by field observation. The team took daily hikes through the jungle, taking photos of different plants and animals, and compiling notes.

“We were running an entire sanctuary, including the rivers and waterways. We were working in the general environmental science field,” said Islam. “We also learned what it’s like to run a sanctuary in a second- or third-world country. We didn’t have the equipment there that we have here, so we worked with limited materials but still successfully conducted experiments in the field.”

During the treks through the jungle, the volunteers identified different species of spiders, insects, birds, mammals and plants, while watching out for various poisonous or otherwise lethal animals, spiked trees and other dangerous conditions, including temperatures that could vary up to 40 degrees in an afternoon. During the rainy season, they had to work quickly; if they stopped for even a minute, their boots would be sucked down into the mud. Villaneuva occasionally had to use his machete to pry himself out.

While they were there, Villaneuva and Islam assisted with several projects, including establishing a sustainable farm; identifying different animal populations, including spiders, insects, caimans and various mammals; studying the relationship between a type of poisonous ant and the tree that hosts them; monitoring logging operations; and preparing the sanctuary’s facilities for the wet season.

During one hike through the jungle, they noticed that some endangered trees had been cut down. They followed the path left by the interlopers and discovered an illegal gold mine. They reported the location to the authorities, who stopped it. When the miners retaliated, the Peruvian Coast Guard intervened and arrested 200 people.

“The feeling of making a difference was the best part. It was really cool to get out of my comfort zone and explore the world,” Villaneuva said. “When you’re in a three-hour lecture, sometimes you struggle to understand or learn everything you need to know. But in an experience like this, you’re going to remember the ant that bit you. I’m going to remember the pattern of a coral snake. It’s one of the most poisonous snakes in the world and a 10-foot long one got within three feet of me.”

This is the first time Maritime students have completed internships at the Panthera sanctuary. Villanueva found the sanctuary when he was working on a paper about deforestation for a class in his junior year, and got approval from the MES internship coordinator, Dr. Barbara Warketine, to apply.

All Marine Environmental Science majors are required to complete two professional internships. Most of them work with marine-based organizations, including The River Project on the Hudson River, the Billion Oyster Project in New York Harbor, Florida’s Dolphin Research Center and the Long Island Aquarium, among others. Learn more about MES internship opportunities.

“At Maritime we focus on the marine part, but it’s important to focus on the terrestrial environment as well,” Villaneuva said. “There is a war on both fronts, with ocean acidification and deforestation.”