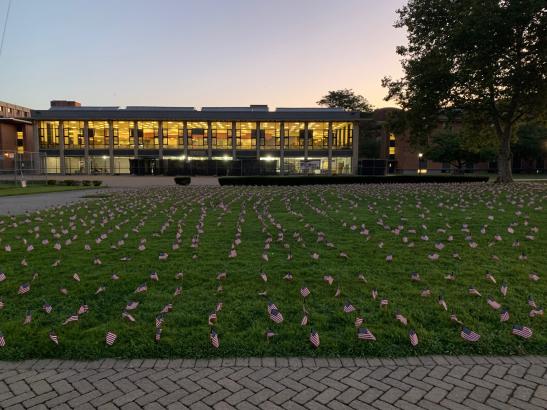 Cadets and civilian students were up early on September 9, for the annual 9/11 Memorial Campus Run. MUGs from the Color Guard placed flags on the grass in front of the quad, symbolizing the lives lost 21 years ago. During morning formation, the Regiment paid special tribute: “As cadets of Fort Schuyler, we strive to follow the example of the mariners of 9/11. Following the attacks on the World Trade Center, all forms of transportation from NYC were secured. Despite not knowing if there would be more attacks, over 800 brave mariners risked their lives to perform the largest water evacuation in history.”

In the attacks, the Maritime College Community lost two of our own. To mariners, the tolling of the bell eight times signifies the changeover of the watch. A set of eight bells was rung for the two Maritime College alums lost on 9-11 at the World Trade Center, Mr. Richard Klares, Class of 1963, and Mr. John Swaine, Class of 1986.