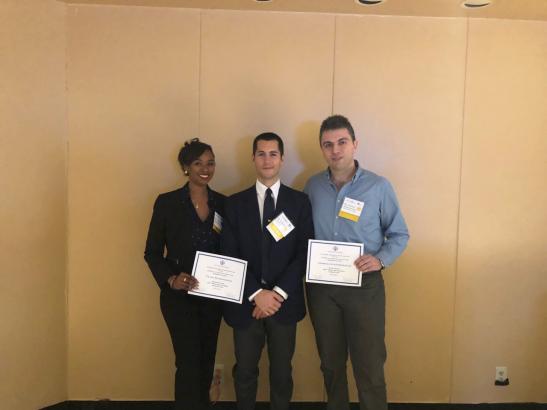 Each year, the Connecticut Maritime Association hosts a competition sponsored by D’Amico Shipping Group that awards students for research presentations based around the maritime industry. The competition was designed to expose the industry and the students to each other’s research and interests.

The three students are each working toward a Master of Science in International Transportation Management, and have been mentored by Dr. Shmuel Yahalom, professor in the Department of Global Business and Transportation. The students are: Andreas Stasinopoulos, of Greece; Tajae Harripersad, of Trinidad and Tobago; and Erika Stetson, of Astoria, New York.

“I’d like to congratulate the winners, as well as the program’s coordinator, Professor Sam Yahalom, on shepherding our students to success at CMA,” said Dr. Joseph Hoffman, provost and vice president of academic affairs at SUNY Maritime College. “Their ability to examine critically and analyze the complex issues facing the maritime industry will help them to think creatively to find innovative and workable solutions throughout their careers.”

Harripersad, who placed second, investigated the impacts of port privatization in the business of shipping.

The three students presented their work and were recognized at the Connecticut Maritime Association’s annual conference in March in Stamford, Connecticut.